For anyone living in London the cost of housing is a hot topic. The price of housing has been rising faster than income for years. Initially effecting students and the low wage earners, expanding to the professional middle classes. The housing crisis seems to be a relentless chronic condition of the city. Year from year on the cost of a home in London rises 7% per year, or 6.5% above inflation. UK house prices (2016) are the second highest in the world per square meter, just behind Monaco. Everyone from service industry employees to corporative professionals are being priced out of the city, as housing in London has simply become unaffordable for most ordinary people. This upheaval has now started to effect the commercial side of the market with office space disappearing into housing conversions with the consequential office price inflation.

The housing crisis is one of the top political talking points in England, but most appear to be identifying symptoms rather than causes as the underlying reason for the crisis. With this crisis having a significantly adverse effect on the economy it should be a governmental priority, yet very little is actually being done to solve it.

The reason for the crisis is simple a matter of supply and demand. The lack of construction  of new housing is driving up house prices. The reason for this lack of supply is not the unwillingness of developers to build, but the planning system and its inability to accommodate progress. With supply being off kilter for so many years, house prices are now growing in double figures in places (2016).

This price inflation creates a great incentive for new and existing residential units to become international “investment” rather than homes. This kind of investment profits makes the actual use of these investment residential spaces impractical and units are treated much like other investment commodities; locked away rather than used. This skews development costs further from land price to construction costs with “million pound homes” becoming a significant portion of new construction, and then being kept empty as investment commodity,not contributing in any way to the housing need. The investment is not a cause, but a symptom of the crisis.

The British planning system is not a proactive system but a reactive one. I.e. it does not plan or implement the future progress of the built environment as it’s name implies. The existing build environment IS the Master-“plan” with any new development treated as a proposed change to the master-plan. This applies to anything from extensions of existing properties to large scale developments. A reactive planning is quite exceptional amongst western planning systems as it does not plan for the future. The system could be a flexible method able to react to any changes in the market, as long as it does not become dominated by NIMBYism (Not In My Backyard) and restrict market forces.

The only constant is change

It’s human nature not to like change, as change is often for the worse and it’s human nature not to want to gamble on it. Existing residents consequently do not like new development or changes in their environment, and will elect politicians that are equally against it. A reactive system therefore creates a rift between the wider need for future growth and the local demand for status quo. This puts the needs of young people and recent residents on one side, and older, settled residents on the other. Responsibility for housing and commercial development growth in the hands of private and commercial developers and not planning officials, Planning Officers and residents become the guardians of the status quo. The consequence of this is that London planning is operated through multiple and growing restrictions against development.

Where London can not grow:

The city grew exponentially into suburbs between the wars, with the 1930s showing the biggest building boom in the cities history, primarily in the suburbs.

After the war this led to a movement calling for the restrictions of the cities outward growth and a development of a Green Belt, a wide territory of building limitation around the city. The Greenbelt has grown since the 1950s with the growth only slowing in the last 20 years.

Renewal and optimisation of the existing built environment is naturally restricted by a reactive planning system. New proposed development are oppose through consultation with local residents and interest groups, by conservation area restrictions, listed buildings, sunlight and daylight constraints apart from the personal interests and abilities of the bureaucracy. In reality NIMBYism is the planning objective of local councillors who are elected by local residents with no interest in change. The young, the newly relocated and others in need of housing have no representation on the local level. Meaning that most of those involved in the planning process, from the Conservation Officer, neighbours to Councillors are interested and committed either to some idea of the “glorious past” or stagnation. Not a single representative of progress, young people or ambition is represented in the process apart from the party making each proposal.

No lack of green space

London is one of the greenest cities in Europe with local access to green spaces from every household in the city. Including large swaths of parkland. These are qualitative amenities that impact development, with restrictions on new built close to those amenities.

Conservation areas and listed buildings are growing in number and size. The structure of the planning system, putting Conservation at it’s core, means that these put severe limitations on new development and the refurbishment of the existing fabric. Planning departments have salaried “Conservation Officers”, none have salaried “Future-” or “Contemporary Officers”. UK has the oldest, and the least sustainable built environment in the whole of the EU (BRE Report). Anyone working in the building industry experiences conservation’s extended power, as the same restrictions are often placed on new development proposals close to listed buildings and conservation areas as those within. Close can mean up to a kilometre away in some cases. With 70% of some central Boroughs listed as conservation areas, the city is turning into a museum of pre 1920s architecture.

London is surrounded by airports with flight-paths criss crossing the city. This puts a practical restriction on any high-rise building in the city. The Shard is the tallest building in London and is the maximum height any building allowed in the city, limited to within 330 meters.

Since 2004 the city has started implementing restrictions on tall buildings in the centre of the city using a planning tool called“view” corridors”. Views across the build environment, where new buildings can not impose on the view cone. This is a response to existing residents afford to the changing skyline of the city.

With the natural development of the city restricted and the resultant price increase, people are being forced to undertake subterranean extensions to their homes to accommodate their contemporary needs. Prices meaning that moving to larger properties being impossible. These kind of extensions started in the more affluent areas of the city, such as Kensington and Chelsea, but have now spread out into other areas as restrictions on new developments put pressure on finding alternative solutions.

As expected councils are now either restricting or banning basement constructions in their areas due to the opposition by local residents to construction traffic and noise. Basement excavations are expensive and limited in scope, and unlikely to properly solve the crisis created by consecutive governments.

None of the planning policies are able to restrict population growth. The 21st century is the century of the city, with people relocating to major cities for economical and cultural reasons. The last time this happened in London was at the time of the 1st and 2nd industrial revolutions in the 19th century. The results in urban development were twofold. The development of unplanned slum building and the division of existing homes into smaller and smaller residences. Whole or even multiple families living in a single room was the norm.

The 21st century London is not place of illegal “slum” development due to property ownership and development control. So development now follows the second of the Dickensian housing development with increasing division of large and medium sized homes into smaller dwellings. The cramped conditions of “shared” housing, or tenement/HMO properties are again the norm. This is likely to continue, even though new buildings in the UK are 40% smaller than in cities of similar density they remain more expensive do to short supply.

Where we are going?

To local residents, development restrictions function in order create or protect free local amenities; old looking street scape, parks, unrestricted horizons etc. In reality these amenities are anything but free. The cost of the restricted urban development is simply diverted from local residents to those who do not already own their home; the under privileged, young people and anyone new renting or purchasing a property in the city. Conservation, green areas, view corridors and other planning restrictions are effectively paid for by first time buyers; a privatised “tax” at several times their annual salary.

Any leadership training teaches that indecision and inactivity has just as much impact as any good or bad decision. The planning system and its associated planning restrictions are causing ripple of problems. One is the division of homes and the increased of dwellings of multiple occupancy. With middle aged, middle class people living in shared households, a lifestyle previously restricted to university students. Another is the exodus of people out of London seeking affordable housing and commuting into the city.

The greenbelt means that the areas being affected are further out than would be otherwise, which leads to the public transport network being under increased and unsustainable pressures. Transport For London (TFL) optimised the transportation network for the London Olympics, with the vision that this would subsequently optimise it for the city for decades to come. All predictions have failed and the transportation network is already filled to the capacity of the Olympics. The new Cross Rail (Elizabeth Line) will at the most optimistic prediction release the pressure for maximum of 2 years at a cost of  £14.8 Billion, with some estimating it will actually fill to capacity immediately on opening.

Sticking one’s head in the sand will not make this problem disappear. The cost of building and maintaining the transport system and the cost of lost man-hours in ever longer commuting journeys, by relying on ever larger commuter networks is unsustainable.

The size of the housing problem in London is substantial. There are currently 69,000 ‘concealed’ families in London, with 17,530 homeless and 49,000 new homes needed each year (2017). In total, London would need 135,530 new homes at the end of the year in order to solve the housing crises. London currently allows 20,000 homes to be built per year. The crisis is scheduled by the Government to keep growing.

To put these figures in a more understandable form: The average new home in the UK is 76 m2 the smallest in Europe. The Shard, the tallest building in the European Union, is 110,000 m2 in size meaning that 1,274 average homes could fit into the Shard (minus 12% circulation etc). In order to solve the housing need at the end of 2016, we would have to build 106 Shards in London in one year.

So this is the challenge to local residents, Councillors, politicians and the Royal Institute of British Architects: Rather than offering a standard answer of “not this, not here”, They need to come up with a definitive SOLUTION: Where and how will you build the equivalent of 106 Shards in London?

This is a situation that requires foresight, resolve and courage; We need a Churchill not a Chamberlain. 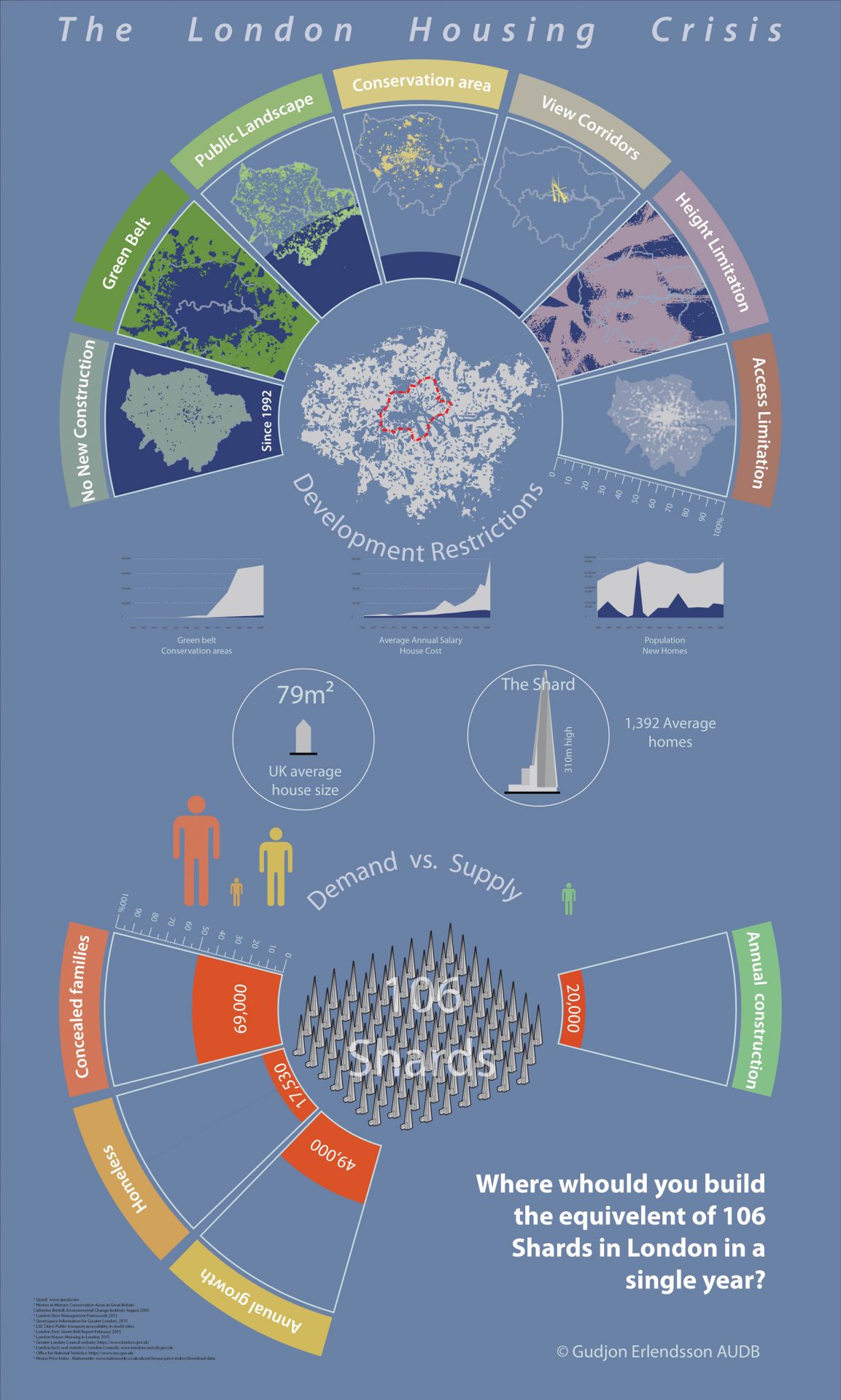